How Does MERN Stack Development Help In Building Web And Mobile Applications?

Technology advancements every day has been giving us more and better. There is plentiful software that has been developed to support mobile applications and to perform better.
However, how much the advancement we see in technology, a user still keeps asking for more and better. With the use of handy mobile devices that allow the users to perform almost everything at their home’s comfort, mobile applications are presently being built with remarkable features.

The pressure eventually falls in the app developers’ hands for building an app that offers a seamless experience to the users. Another important aspect is to create an app that is fully loaded with useful features that can withstand and sustain in the competitive app world. To create these apps, most developers had sought out the traditional method of utilizing HTML and JavaScript. But newer techniques have come in to benefit them.

MERN is the new stack that several developers nowadays prefer to develop the feature-loaded capable app. Let’s see how this MERN Stack development is useful in creating mobile applications in detail.

MERN is a JavaScript full-stack application for mobile and web applications development. It mainly simplifies the process of building applications effortlessly and efficiently. It is an open-source development stack that offers the app developers the necessary components from the front-end to the back-end.

When it comes to learning the MERN stack, it is notably more comfortable than any other software for developing applications. MERN is easy to understand and use specifically for the developers working on mobile and web applications. If one is good at working with and comprehending the fundamentals of JavaScript and ES6, MERN should be a piece of cake. Knowledge of Node and React technologies prove useful as they are also a part of the entire MERN stack. 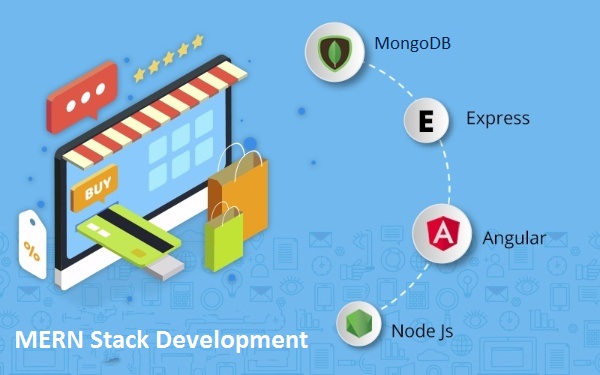 Let’s see how each one of the stack components benefits the user.

It helps the developers to separate the data by storing it in different documents.
Data segregation in many machines helps developers store large scale data and thus improve scalability.
It offers a swift response to the developers due to its document-oriented database.
It also supports indexing the documents without any trouble.
It makes use of JavaScript, which can be comprehended easily and is widely available.
It also lets data sharing irrespective of the size and volume amongst other users at any time.
It is flexible in assisting document models, which are faster and simpler.

The applications developed with this framework are faster, have a high-efficiency rate, and have high scalability, similar to Mongo DB.

It is a single-threaded framework, and so the apps can be swiftly developed and tested.
The significant advantage is that it is an Asynchronous framework.
It has one of the largest communities for the Node JS framework.
It has a built-in router that permits the reusability of codes.
Express JS framework has an inexhaustible and dynamic API.

It has an inbuilt virtual DOM object, which lets the developers make any changes to the web applications and renders it all over again.

This framework has components that support the logic and UI of any web or mobile application, and thus it can reuse the code.
It has a high-performance rate due to the components like JSX and virtual DOM.

This framework lets the users follow a single-threaded model, thus making it simple and easy to use.
It is an open-source runtime JavaScript setting.
Data streaming can be performed while using this framework.
It offers high scalability, thereby enhancing the framework’s productivity.
It can execute the codes faster as it is built on Google Chrome’s JS engine.